Among the exceptional pieces in The Personal Collection of Jonathan Grimble auction, we are honoured to present work from Wilhelmina Barns-Graham, Sandra Blow, Prunella Clough and Margaret Mellis; four female artists that helped to define modern and contemporary art after the Second World War in Britain.

Economically and industrially, Britain was rebuilding itself after the war, allowing British artists of that time to start to see their surroundings in a different light. For female artists in particular this would have been a time where the industrial changes in Britain would have perhaps been made more prominent, the role of women in society had shifted as they had become a part of the economic and industrial work force. 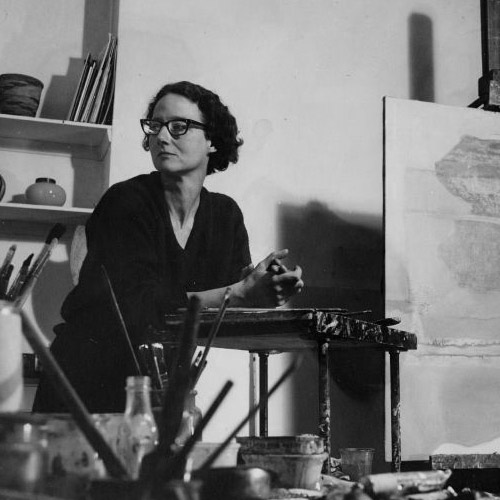 Prunella Clough was among one of the first female artists who started to document the industrial change in Britain. During the war Clough worked as a cartographer where she developed a visual language for the changing boundaries between rural and urban in her paintings, drawing inspiration from industrial wastelands. 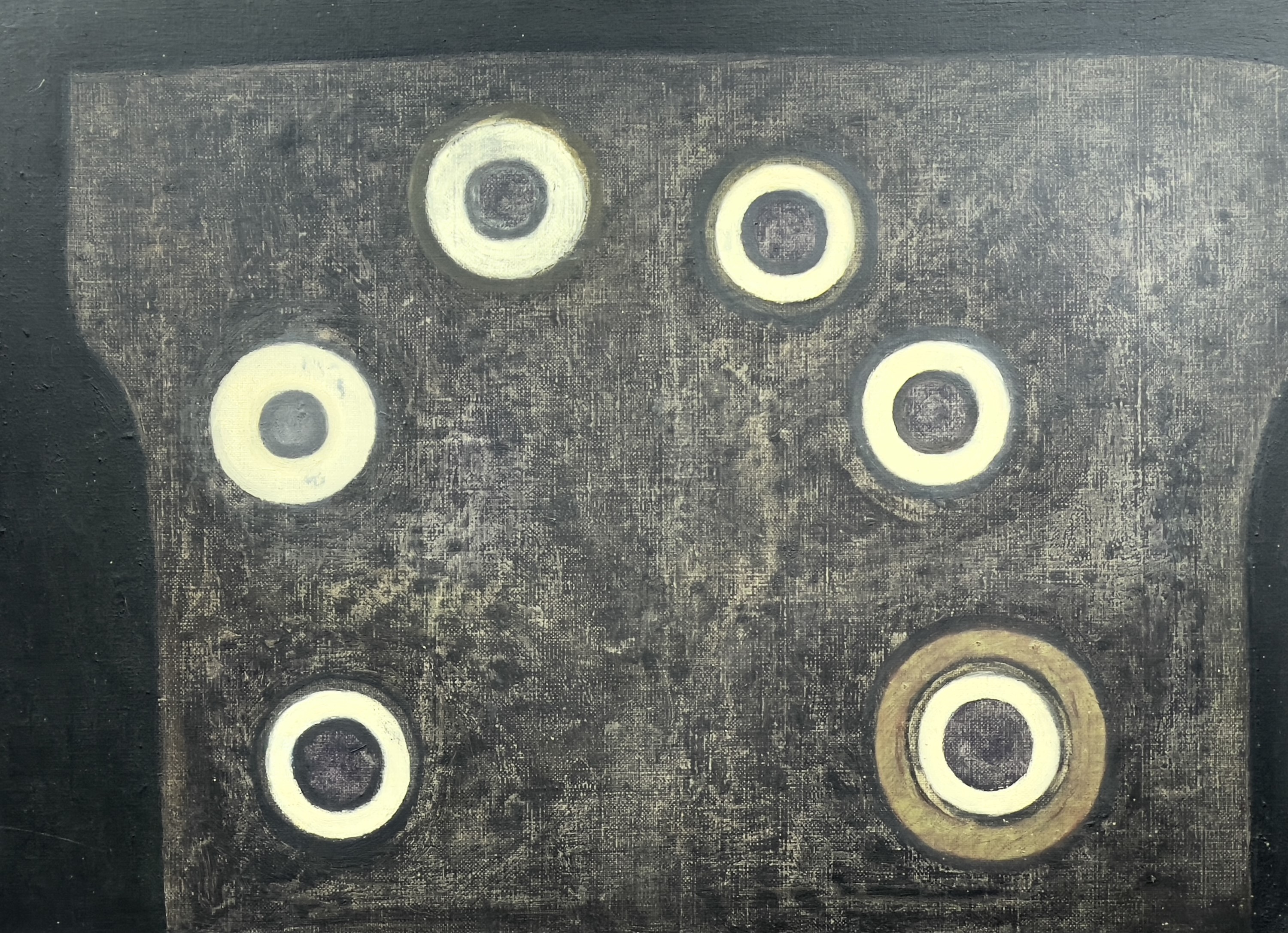 The colours that we see in lot 46, Prehistory, painted in 1965, shows Clough's muted tones and abstract circles reflecting the industrial environment that was surrounding her at the time. It is argued that Clough's work was inspired by L. S. Lowry, similar themes, tones and environments are seen in both artists work. Arguably Clough's work is a more contemporary expression of industrial towns in Britain and focuses in on the details and shapes of working-class landscapes. 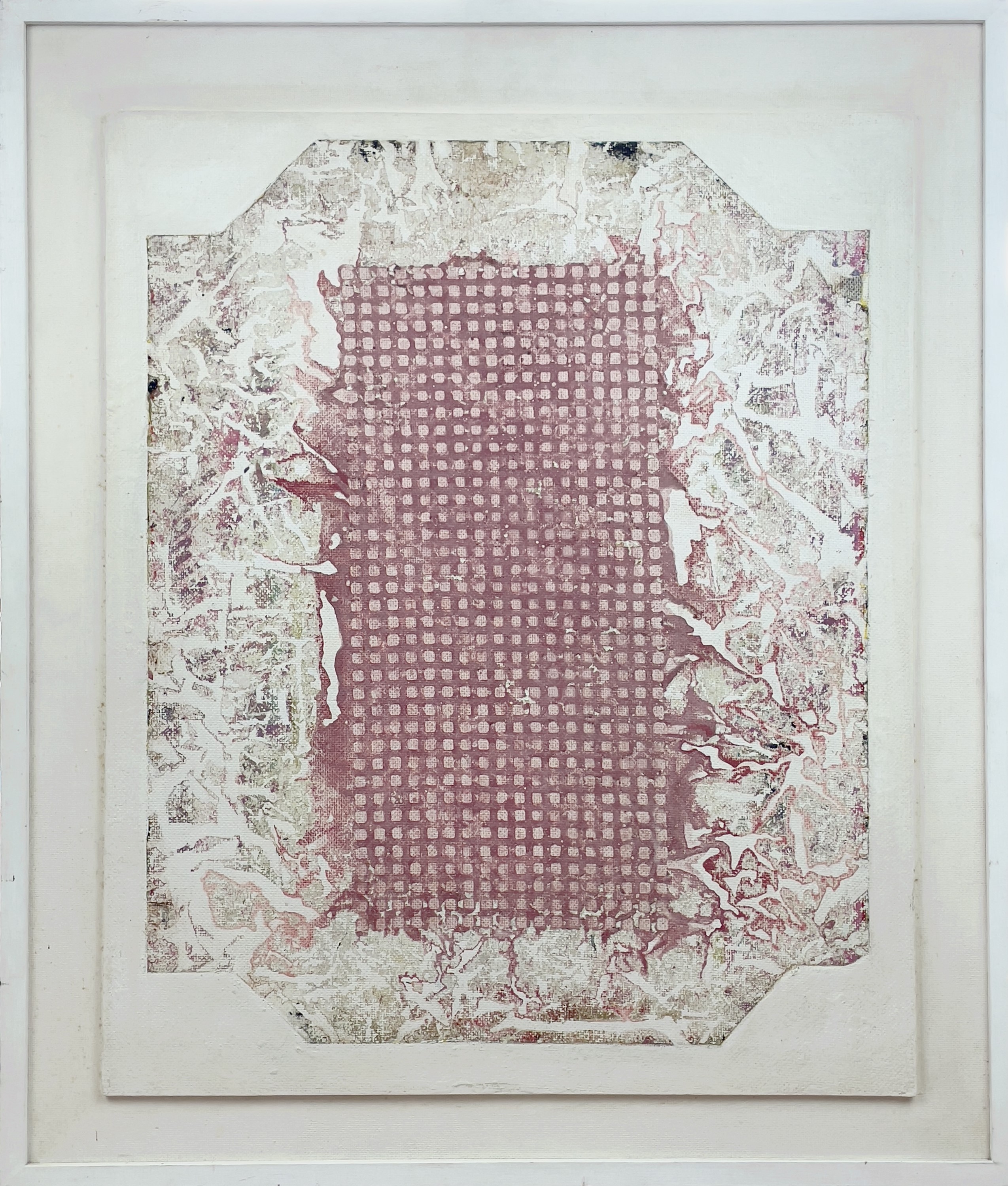 Clough also worked as a designer, which explains why in her work, we often see experiments with textiles and patterns,  interwoven into the urban environments she brought to life, such as lot 128, Wrapper, 1985. 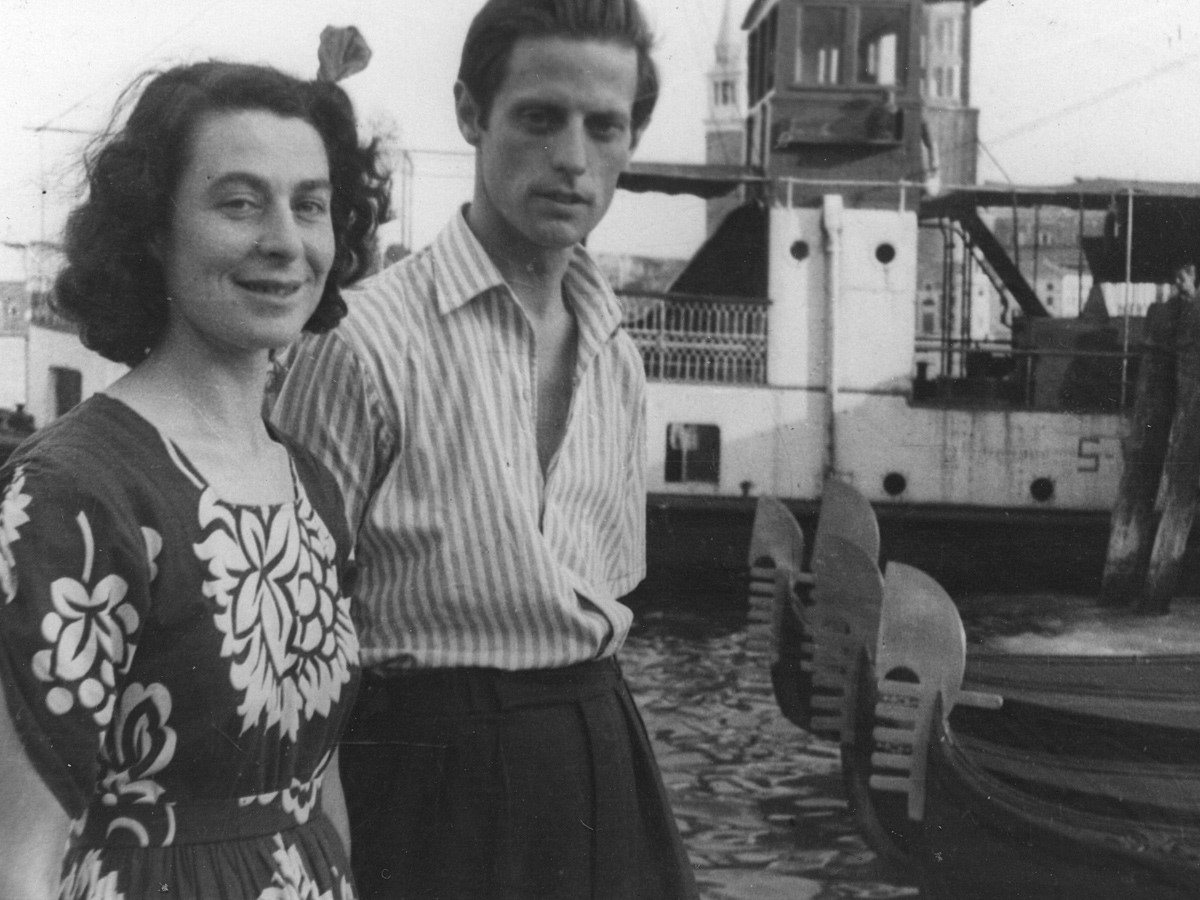 Although Prunella Clough's work was centralised around industrial Britain, in the 1940s a lot of artists started to migrate to Cornwall, particularly to the coastal town of St Ives, where they drew upon the natural environment to inspire their work.

Artist Margaret Mellis and her husband, art critic Adrian Stokes were two of the first to move to Cornwall during the Second World War. Arguably their move to St Ives was the catalyst that brought together a group of artists who altered the course of modern British art. Artists such as Ben Nicholson, Barbara Hepworth, Patrick Heron, Terry Frost, Peter Lanyon and Naum Gabo migrated to St Ives during WW2 and the following years. While in St Ives and under the influence of Nicholson, Mellis began to work in collage most notably Collage with Red Triangle II (1940) which was initially a gift for Naum Gabo and is now in the collection of the V&A Museum.

In 1946, following her divorce from Stokes, Mellis met the artist Francis Davison. After travelling to France together they moved back to the UK and lived in a fisherman’s shack in Suffolk. It was there that Margaret explored still-life painting (much like lot 18) and Francis pared down his pictures into simple flat forms, switching to collage from 1952.

Unlike Prunella Clough, Mellis used her surroundings of the coastline and a more natural environment to express her perspective of Britain of that time. Developing her own style later in life and becoming an incredibly important figure in modern British art. The 1995 Turner Prize-winner Damien Hirst, concluded that Margaret had been neglected by critics and curators and deserved to be "up there - large on the map with her contemporaries". 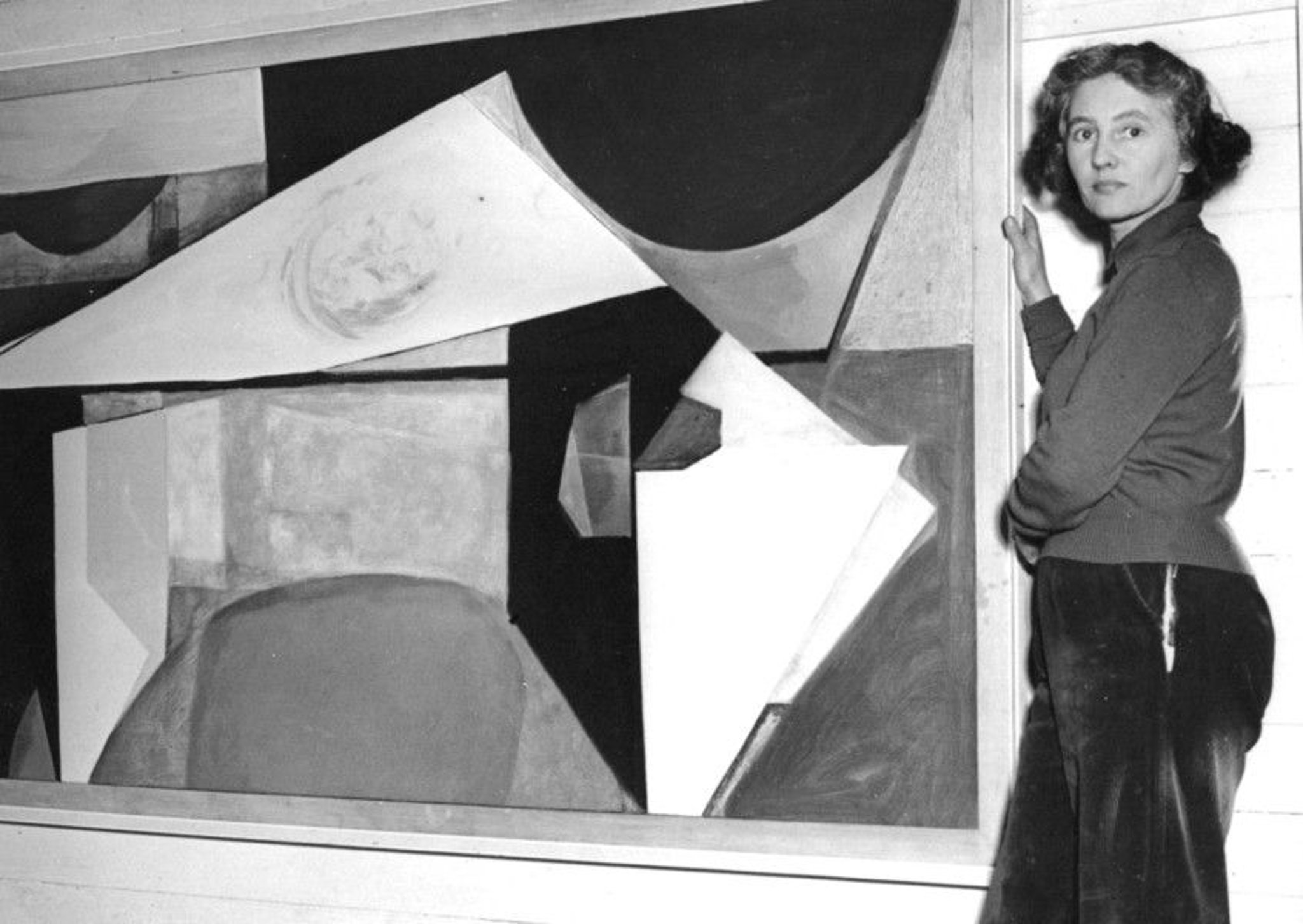 Wilhelmina Barns-Graham, much like Prunella Clough, started painting the industrial landscape of Britain during the Second World War. In 1941 all women aged between 1940 were called up by the Ministry of Labour to assist with the War Effort and Wilhelmina was summoned to create camouflage nets and was later enrolled as an air raid warden. War restrictions prevented outdoor painting of landscapes, resulting in images being painted remotely. From memory, she started to sketch out her experiences using pastels.

Wilhelmina Barns-Graham studied alongside Margaret Mellis in Scotland, and moved to St Ives not long after Margaret in the late 1940s. She became a core member of the St Ives artists colony.  As a female painter she occupied a unique position among the St Ives group, alongside artists such as Frost, Lanyon and Hilton. With their arrival as young men determined to make their careers and exploit a new atmosphere favourable to modernism, the St Ives scene became competitive.  As they strove to establish their names and secure dealerships in London or abroad, Barns-Graham began to feel that she was being side-lined.

During a trip to Switzerland in 1949 she encountered the Grindelwald Glacier, which resulted in a growing inclination towards a fundamentally abstract language. In these new works, she drew on D'arcy Wentworth Thompson's mathematical theories of organic growths, that explain the patterns of natural form and regeneration. These were also years when Barns-Graham and her husband, David Lewis travelled widely, met other modern artists in Paris and toured in Italy. While her professional life flourished, resulting in her first exhibition as a solo artist in Edinburgh in 1956, her marriage to Lewis suffered, eventually leading to their separation in 1957. 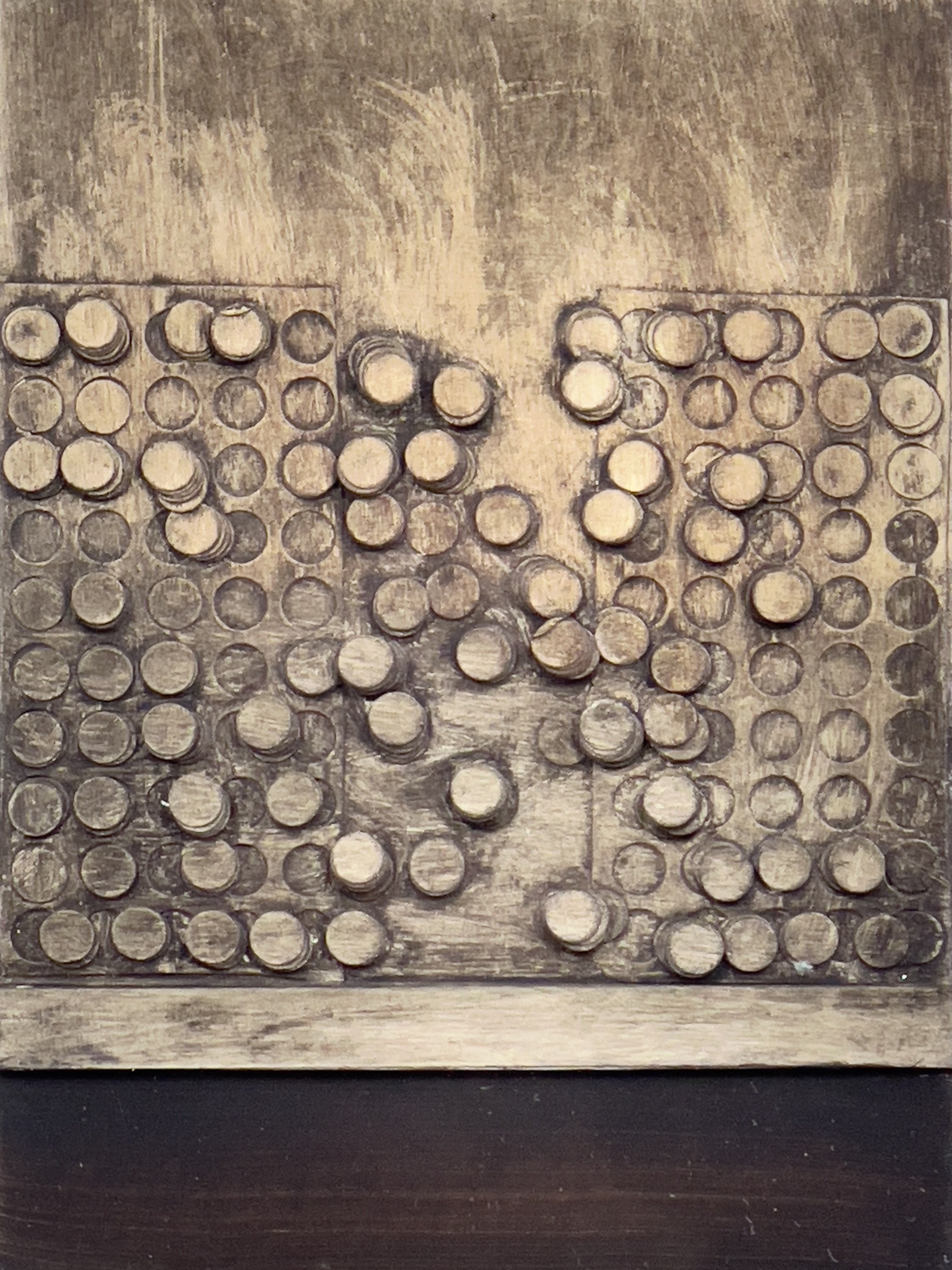 As shown in lot 136, Untitled, collage and oil on board, Barns-Grahams later explored relationships and the impact of one element on another in her work using collage and oil on board. In the 1970s and 80s she began to divide her time between St Ives and St Andrews.  Her work changed direction, employing hard-edged geometric and linear forms. Wilhelmina Barns-Graham died on 26 January 2004, deeply mourned and honoured; she was made CBE in 2001. She saw published in 2001 the first full biography, by Lynne Green, a revelation to all who open it, which showed for the first time how tightly woven into the fabric of modern art in Britain and abroad was this remarkable woman.  Barns-Graham set up a charitable trust for the better preservation of her artistic legacy in her will, it provided bursaries for art students in the UK. 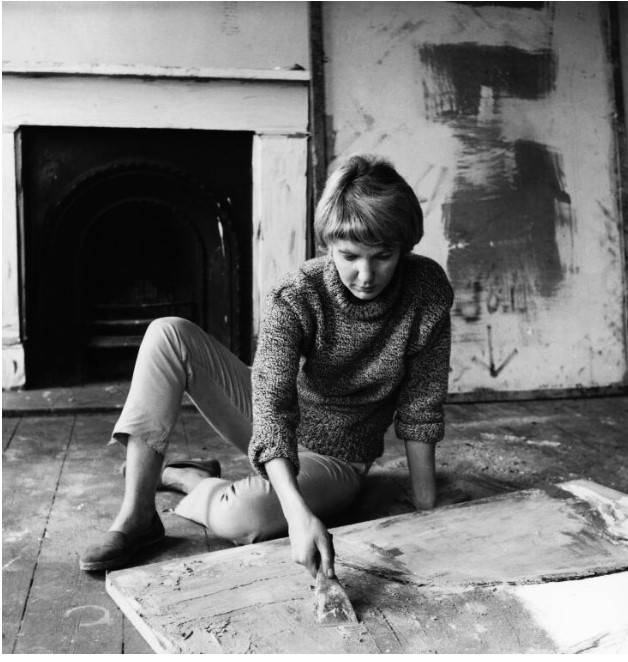 In Jonathan Grimble's collection, we have six excellent works by Blow. Jonathan was an agent for the executors of Sandra Blow’s estate, which he ran from Sandra’s studio in St Ives.

Sandra Blow studied at the Royal Academy Schools shortly after the Second World War, but in 1947 ventured further afield and lived in Italy for a year. She worked with the well-known Italian painter Alberto Burri. While Blow did not produce work of her own in Italy, she learnt a great deal from the Italian master of "art informel" and later adapted Burri's manner of composing with sackcloth, tar and other more natural materials.

Despite her youth, Blow was at the forefront of the abstract art movement in Britain during the 1950s. Following her first painting sale to Roland Penrose (a founder of the Institute of Contemporary Arts), Blow's career took off. Throughout the 1950s and early 1960s, she regularly exhibited with Gimpel Fils, the leading London gallery whose association with St Ives artists like Barbara Hepworth, Ben Nicholson and Peter Lanyon prompted her move in 1957 to live for a year in a cottage at Zennor near St Ives. Blow was widely exhibited abroad throughout this time, establishing the international profile that her cosmopolitan outlook warranted. Participation in peripatetic displays of contemporary British art saw her work promoted in Italy, Holland, Germany, the United States and later Australasia.

In 1960 having returned to London, Blow acquired a large studio at Sydney Close in Kensington, where she worked for the next 24 years. In 1961 she started a 14-year stint teaching at the RCA, at an auspicious moment when David Hockney, Patrick Caulfield and Ron Kitaj were among the students. In moving to St Ives during the mid-1990s, Blow came full circle, reinvigorating a Cornish art scene bereft of the glories she had sampled 35 years before.

Although painters like Jennifer Durrant and Joan Mitchell shared with Blow, ambitious scale and expressive dynamism, she stands as the earliest and most original female painter in Britain able to challenge her male colleagues of the time with free, informal abstract painting.

David Lay Auctions are honoured to present works from each artist in 'The Personal Collection of Jonathan Grimble' auction. All broke barriers in their time to become four of Britain's leading abstract artists to date. Although Clough, Barns-Graham and Blow are already widely known; Margaret Mellis is arguably yet to receive full recognition for the influence of her vital role as the catalyst that brought together the St Ives Avant-Garde artists. Their work inspired other important female figures in the Cornish art scene, some of whom feature in this sale, such as Rose Hilton, Joan Gillchrest, Biddy Picard and Anne Harriet Sefton 'Fish'.