An insight into the amazing collection

of fine art for auction this month.

On the 28th & 29th January 2021 we are starting the year off with a very exciting selection of fine art, sculpture and ceramics. The sale has some of Britain’s most influential portrait painters including Laura Knight and John Opie and we have many paintings from Newlyn Schools artists such as Garstin, Hemy and Banks Fortescue. Amongst the 20th century Cornish art there are paintings and prints by Alfred Wallis, Bryan Pearce and Terry Frost, all artists from the St.Ives Colony who approached their work with a naïve and abstract style. There are three wonderful original works by American cartoonist, Charles Addams, from his most famous creation ‘The Addams Family’. Also a fabulous, large oil by the quirky, and much loved, Plymouth artist Beryl Cook and the stunning, life sized ‘Girl with Doves’ sculpture by David Wynne all for sale in this auction. 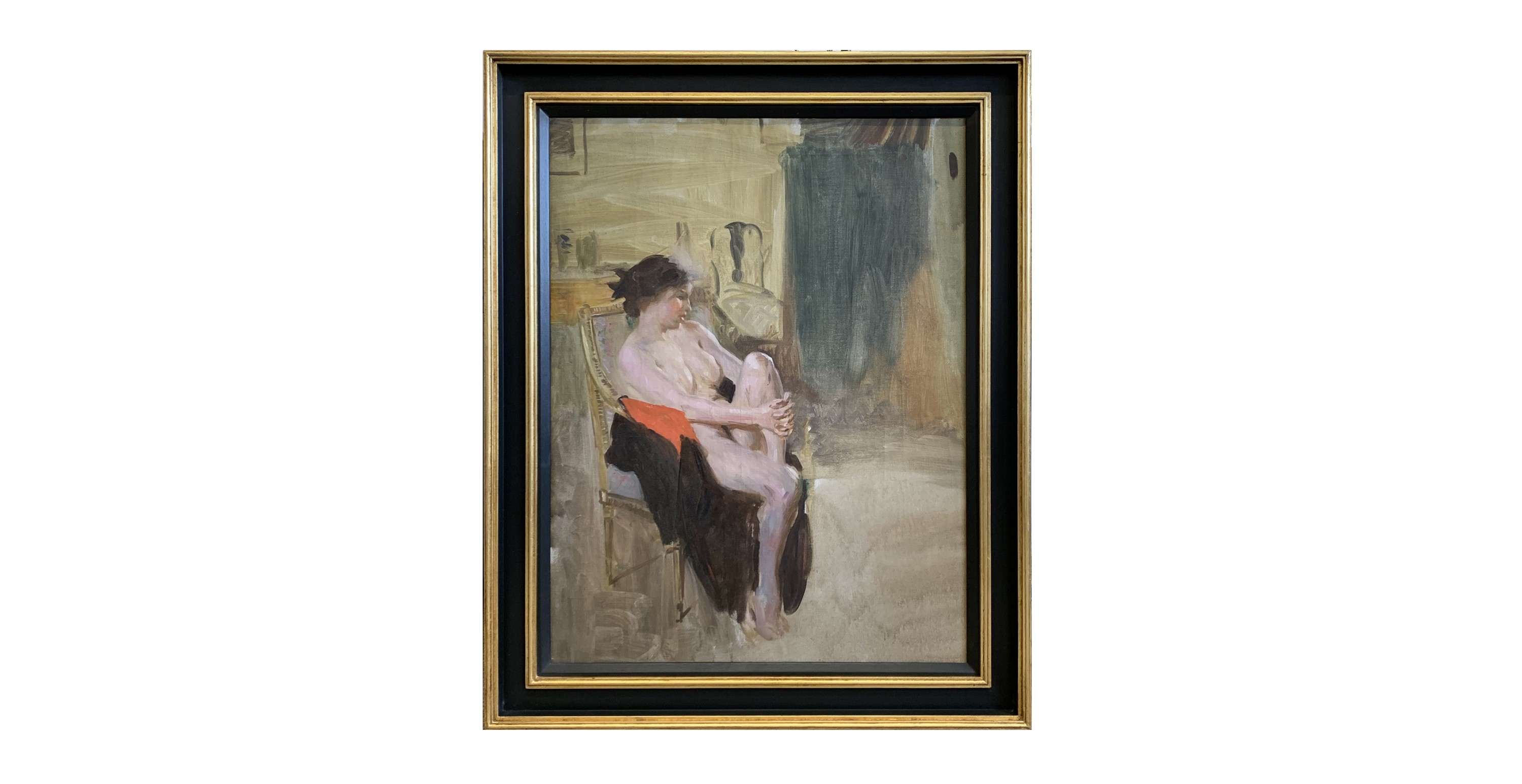 Our star lot is a beautiful painting by Laura Knight, ‘Study of Ella Naper’ in oil on canvas. We believe this was an early study of Ella Naper from the period of Laura’s most celebrated work 'Self Portrait with Model'. In it we see the artist experimenting with scarlet, black and flesh, the three predominant tonal areas of Knight’s masterpiece. It is a gorgeous, sensuous painting and it is delightful to think that in this study, Knight was beginning to throw off the restrictive shackles placed upon her sex, in preparation for her most famous work and one of the most important paintings of the 20thcentury.

We know from Ella Naper herself that she would pose for Laura for many hours, such a liberated and emancipated act for a respectable middle class, albeit bohemian woman in 1913. The two women were extremely close. The freedom and confidence this must have given the artist cannot be understated. This was the age of the Suffragette Movement and sisterhood. The collaboration between this artist and model, Laura and Ella, was hugely significant because it had the power to break down barriers and herald change. In that historical context, this relatively unknown, unseen work is an important part of their story. 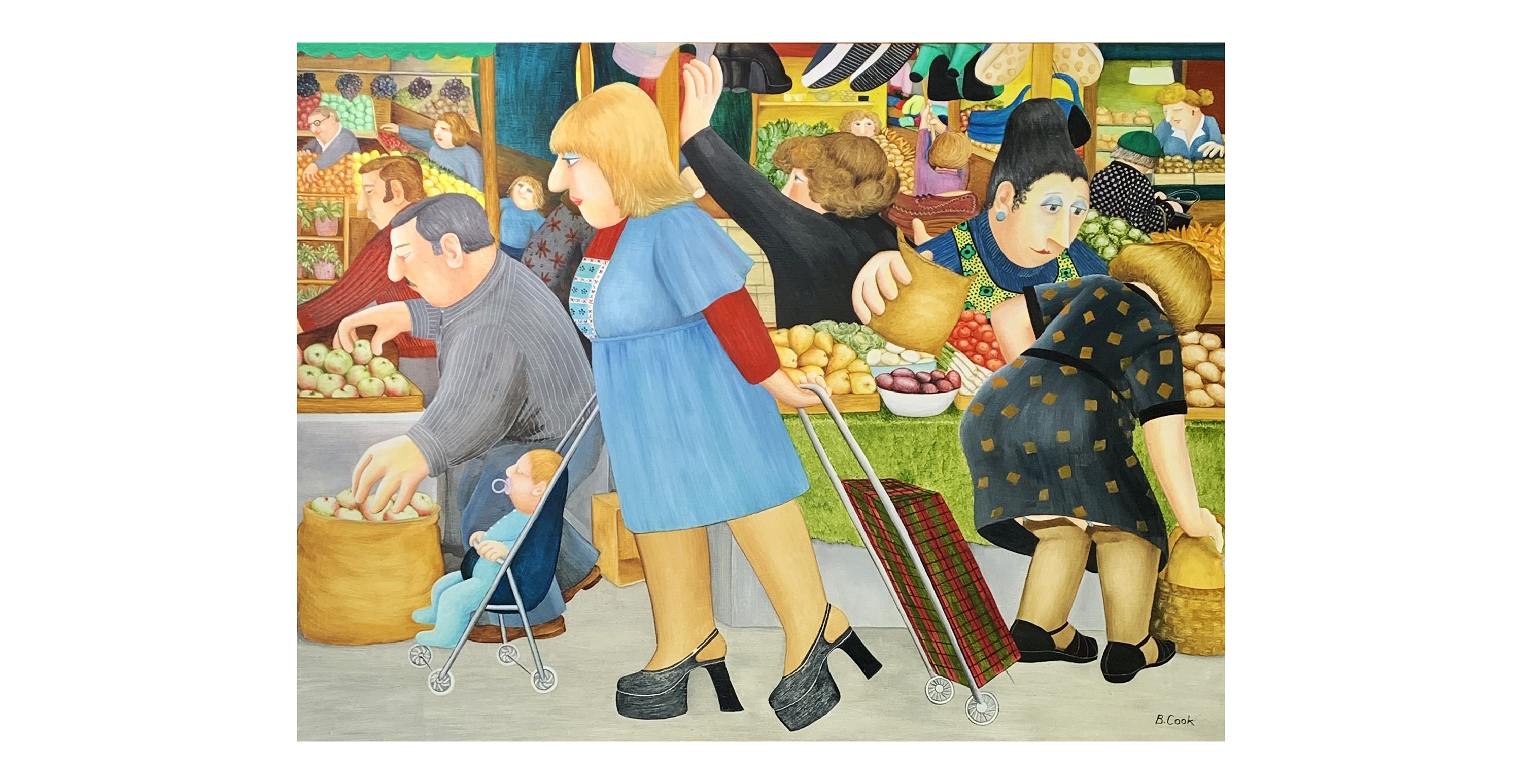 Beryl Cook moved from London to Plymouth with her husband John in 1946. They ran a boarding house and in the winter she concentrated on her paintings. In 1976 Cook had her first London exhibition, which was very successful. She became an enormously popular, critically acclaimed, British social realist painter. Exhibiting her work in London Portal Gallery, Walker Art Gallery in Liverpool and the New Glasgow Museum of Modern Art, ensuring her place in the annuls of British Art.

In this auction we have three of Cooks prints and one remarkable painting ‘Plymouth Market’, which was inspired by Cook's time observing street scenes in her local city. Cook was a social observer and recorded with an acute eye human frailties and absurdities of human behaviour. People were drawn to the humour and bold colours in her work, which is what to this day made them so successful. It is thought that this painting was the inspiration behind the Beryl Cook Post Office animated advertising campaign with Les Dawson.

Harbour and Ships by Alfred Wallis.

After his death Alfred Wallis became a renowned painter, but during his lifetime he was a marine stores dealer and fisherman. He often struggled financially and had to improvise with materials, painting on found objects, plywood and cardboard. He painted from memory the seascapes which he had grown up with since he was a child.

For sale in this auction we have his piece ‘Harbour and Ships’ produced in oil and pencil on card. It is a stunning naïve representation of Wallis's memories of the Cornish seascape he observed his whole life.  Artist Ben Nicolson best described Wallis's work as "Something that has grown out of the Cornish seas and earth and which will endure". 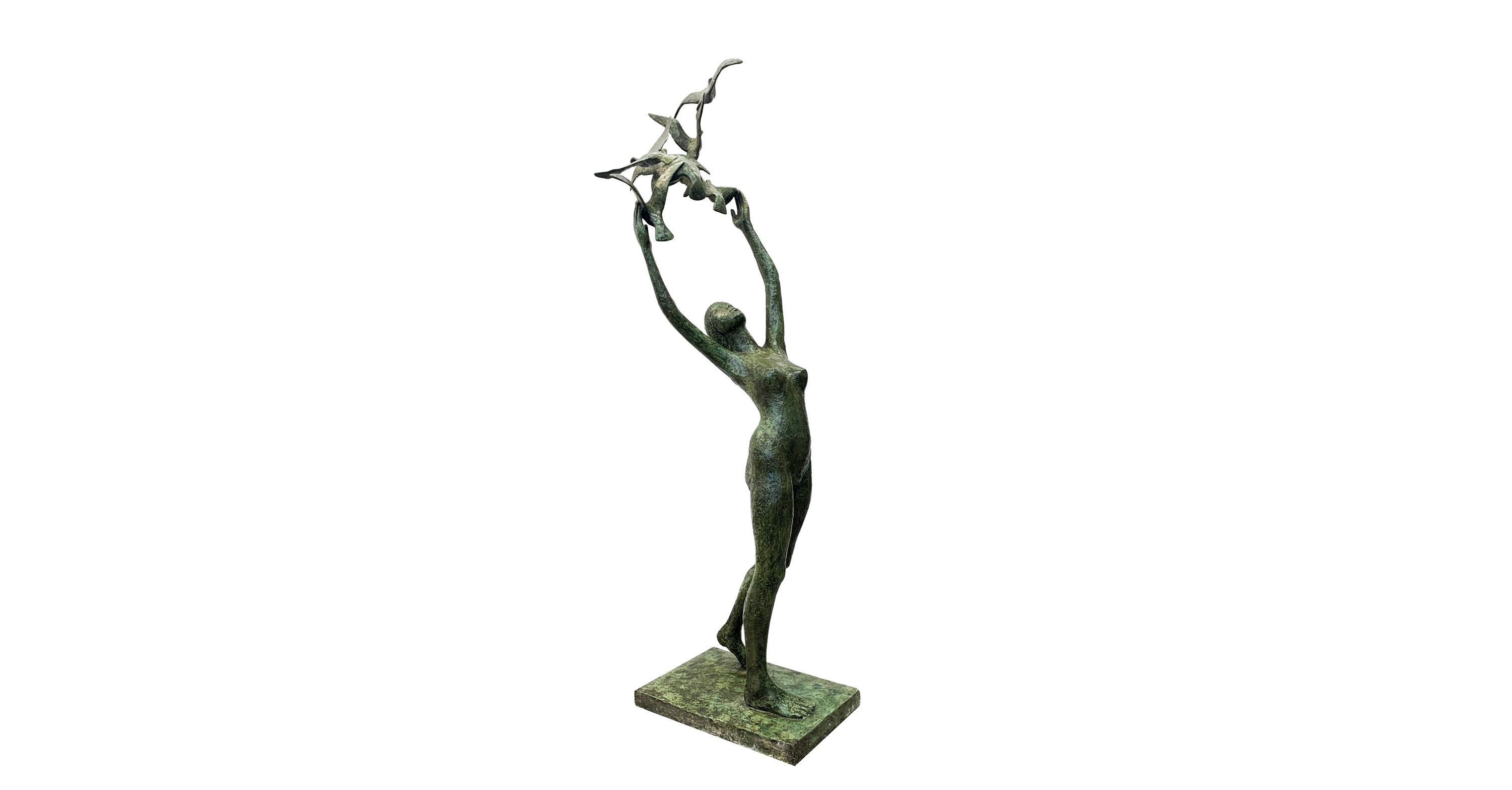 'Girl with Doves' by David Wynne.

David Wynne spent his youth studying zoology at Trinity College, Cambridge. It was his real immersive experiences with animals that he embarked on in his later life, that lead to his nature themed sculptures.

This extraordinary life-sized work ‘Girl with Doves’ is from an edition of four and we are thrilled to have it in this sale.  One of the other three ‘Girl with Doves’ sculptures sits at the University of Arizona, USA. In recent years his work has become highly sought after by collectors all over the world. His sculptures now represent a great opportunity to acquire quality Modern British Art. 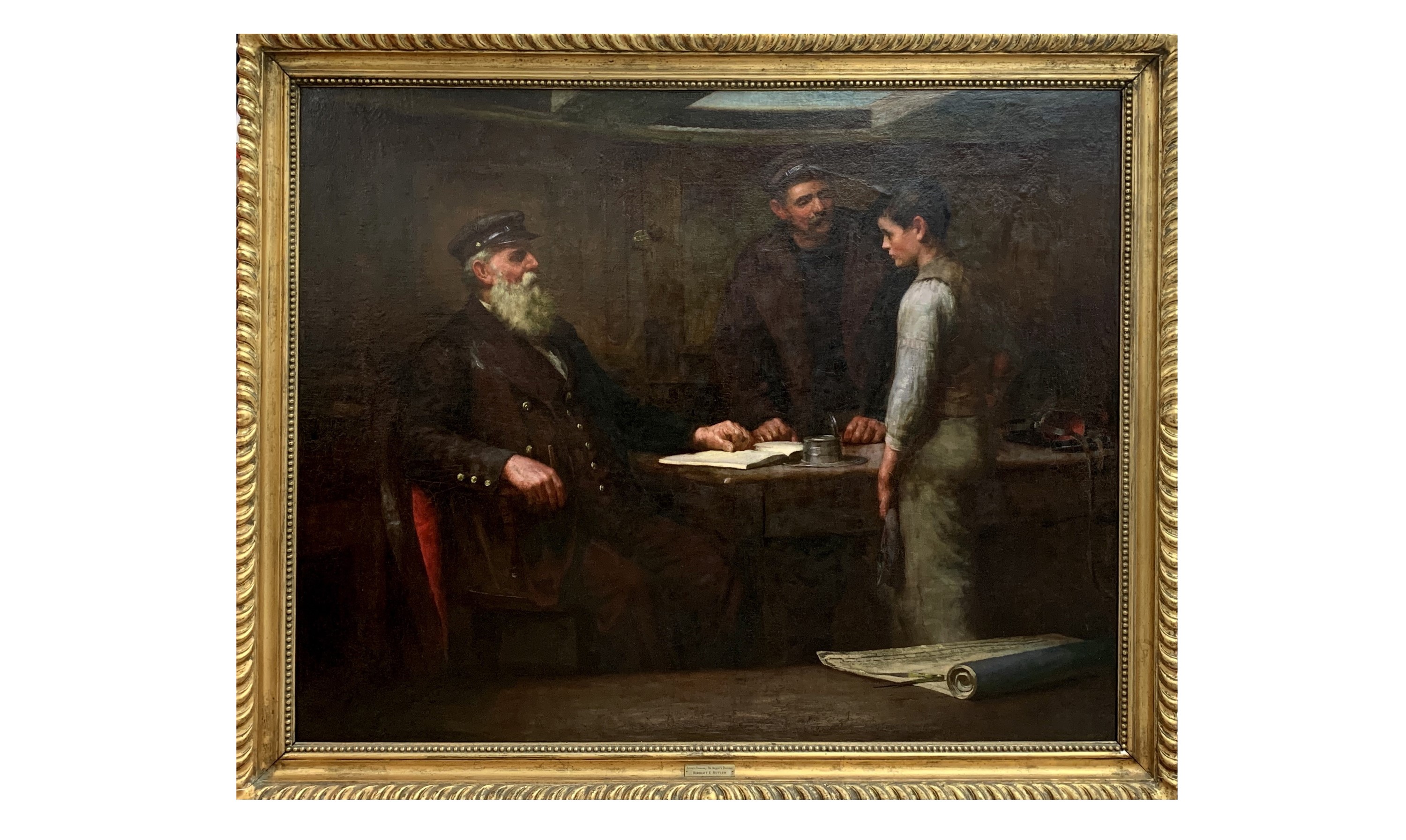 Rating a Stowaway: The Skipper's Decision by Herbert E.Butler.

Herbert E. Butler was born in London and studied at the Royal Academy school in his youth. After living in both America and India he moved to Cornwall later in his life. Butler enjoyed a national reputation with fourteen of his pictures being exhibited at the Royal Academy including large oil paintings, so fashionable with the Victorians. His oil painting 'Politics' was exhibited at the centenary exhibition of the Ipswich Art Club in 1974 and he also exhibited at the International Society; Liverpool Walker Art Gallery; Manchester City Art Gallery; Royal Society of British Artists and the Royal Institute of Painters in Water Colours. ‘Rating a Stowaway: The Skipper's Decision’ will be for sale in this auction. It was exhibited at The Royal Academy in 1905. This piece is believed to have been inspired by his time spent observing harbour and fishing scenes in Cornwall. 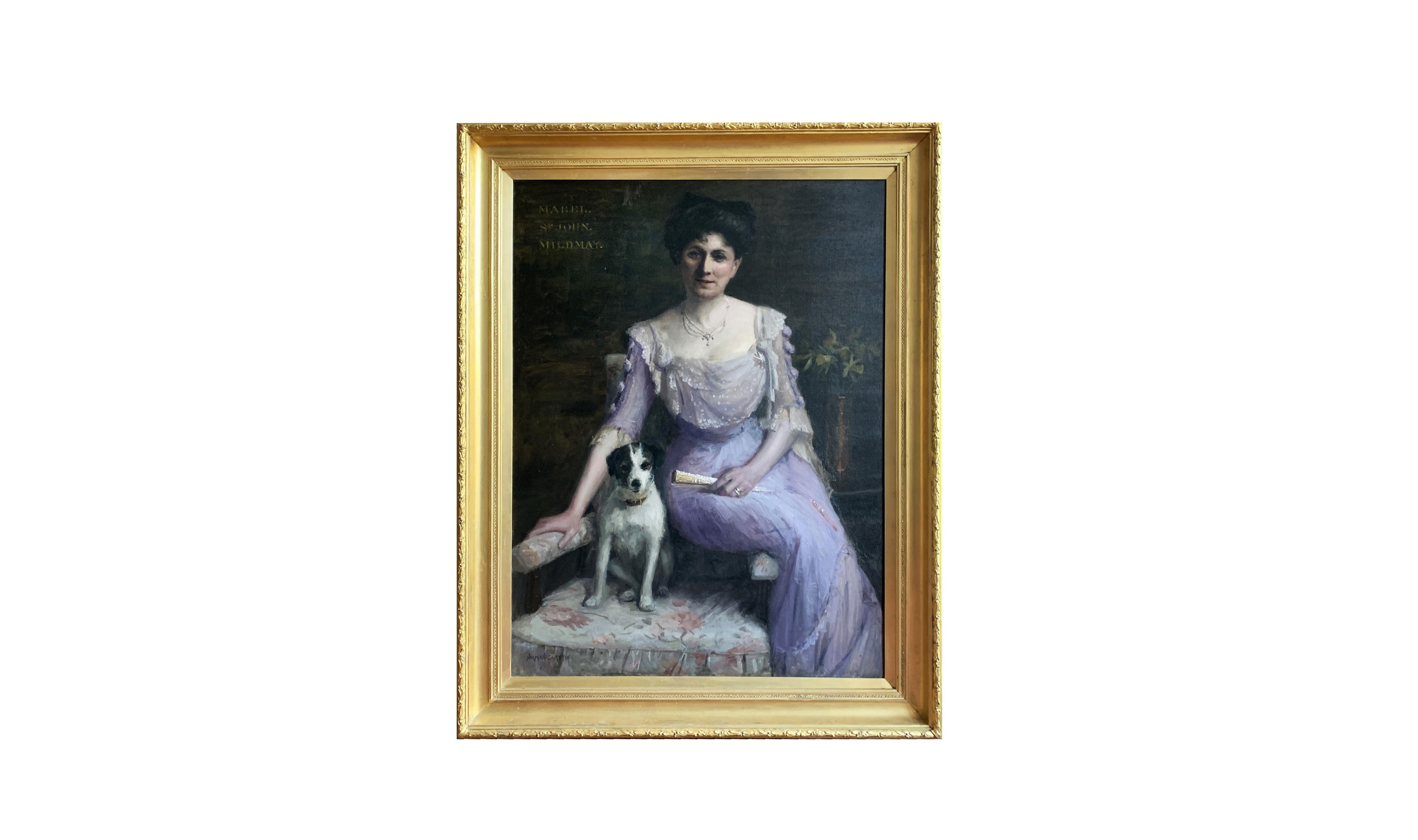 The Lilac Dress, A portrait of Mabel St John Mildma by Norman Garstin.

Garstin painted plein air and was influenced by Impressionism, Japanese art and James McNeill Whistler. His work is held in many national and local collections such as the Tate and Penlee House. Garstin worked as a painter, teacher, art critic and journalist. He was a founding member of the Newlyn Society of Artists. This portrait of Mabel St John Mildmay shows her sitting on an arm of a chair wearing a lilac dress with her terrier at her side. Mabel St John Mildmay and her husband were both talented artists and fervent admirers of the Arts-and-Crafts movement. 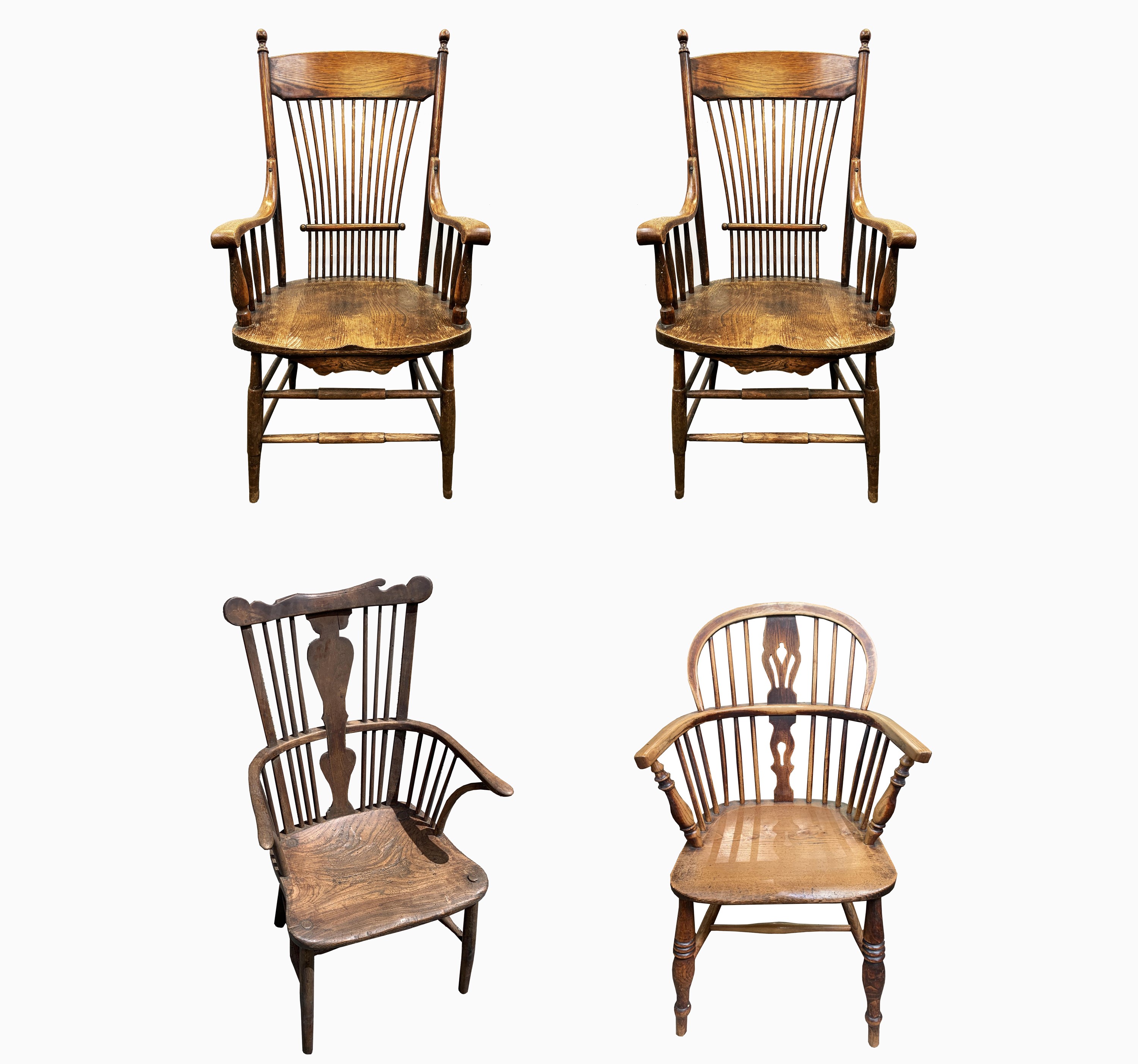 Image one: “It’s the children, darling, back from camp” Lurch, Morticia and Gomez, receive Wednesday and Pugsley from a nervous delivery driver whilst Uncle Fester watches through the bannister. 1947. Image two: “Oh, it’s you! For a moment you gave me quite a start” Lurch waits on Morticia, whilst Uncle Fester watches from the attic hatch. 1939. Image three: Grandmama, Wednesday & Pugsley baking bat cookies. 1962. All by Charles Addams.

We are delighted to have three separate original Addams Family cartoons by Charles Addams in our Fine Art Sale. Charles Addams was an American cartoonist, known for his sinister, macabre work. He was a household name in the pages of The New Yorker from the mid-1930s throughout the 1980s. The three illustrations for sale are all from his most famous creation ‘The Addams Family’, created in 1938 as a cartoon for The New Yorker and later adapted into a TV series and film. These originals are executed in watercolour, ink and wash on Whatman drawing boards, and feature all of Addams’s wacky and eccentric 'Addams Family' characters. 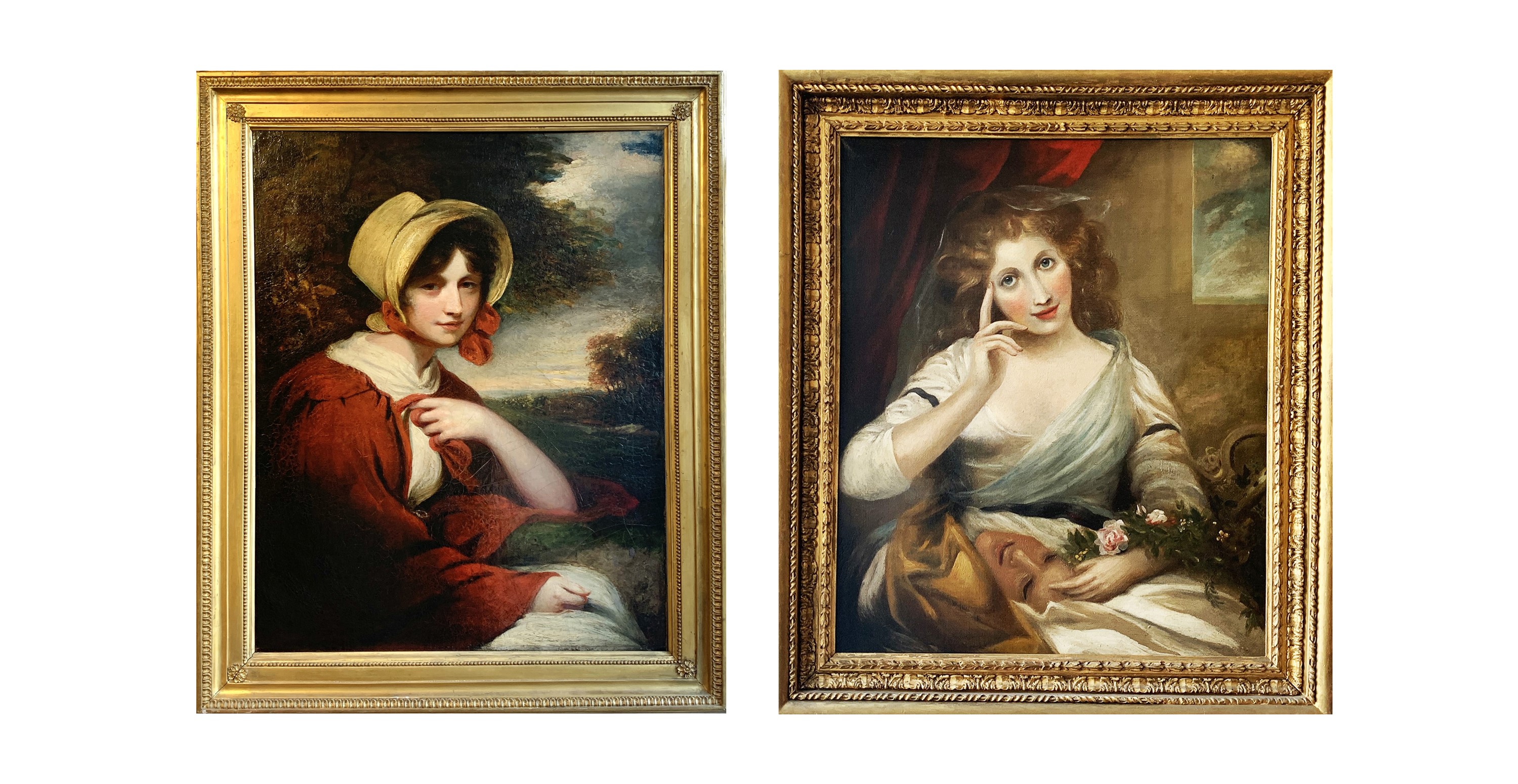 Opie was something of a child prodigy and was discovered by the political satirist John Wolcot, who in 1781 successfully launched him in London as an untaught genius (‘The Cornish Wonder’). His style as a portrait painter was marked by strong realism, with rich Rembrandtesque lighting.

His career continued to flourish and he became professor of painting at the Royal Academy in 1805, his lectures being posthumously published in 1809 (prefaced with a memoir by his wife, the novelist and poet Amelia Opie). Apart from portraits and genre scenes, he also painted history pictures, notably for Boydell's Shakespeare Gallery.

In our January Fine Art Sale, we have three striking portraits by John Opie for sale. One being a portrait of Mrs Elizabeth Kemble, who was a well renown British actress at the time. In these portraits, Opie uses the contrasts of light and dark for which he was particularly renowned to very dramatic effect.

The catalogue for this sale will be live on our website on Friday the 15th of January. To leave bids, either do so via your online account, email or call us on 01736 361414. You may also book a telephone line. The sale will start at 10:00am on Thursday the 28th and Friday 29th January.